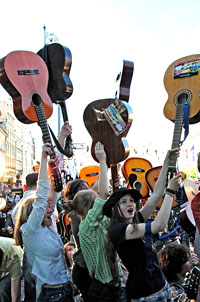 In May 2005, 1201 guitarists gathered in Wroclaw’s historic Old Town Square to play Hendrix’s songs together, with an estimated 15.000 additional observers in the audience.

This time we’re meeting each other on May 1st 2006 on Wroclaw’s Market Place in the city centre. It´s gonna be our 4th attempt to beat the Guitar Guinness Record and third edition of „Thanks Jimi Festival”.

So far the world biggest guitar orchestra was performing on american´s EPIPHONE guitar producer anniversary, where 1555 musicians were assembled playing together.

As in the past three years, the festival will be preceded by a two-month educational workshop via mass media and the internet. „My idea was to teach people Hendrix’s songs so that we would be able to play them together,” says Cichonski. „And step by step we mastered three songs.”

So if you are either a professional axeman or an amatour, present or would be, male or female… and if you still aren’t hooked on this fest reading the above description, you never will! But mark these words, Wodstock Fest. was only once-in-a-lifetime occurrence. So was Altamont Fest. THANKS JIMI FEST is ahead of them – it was reproduced succesfully for the third time. Contrary to them both – THANKS JIMI FEST is alive, well and kicking.

Your help and contribution is highly appreciated!
You can download the event info and send it to your friends.

Spread the word on your guitar and music forum!!! Let’s make it an international event this year! Well, we hope to see you guys in Wroclaw soon!